Last Thursday 16th July, HERSILL had the pleasure of being invited as an attendee to the State Tribute held in the Plaza de la Armería of the Royal Palace in Madrid in memory of all the victims of the COVID-19 and the workers in the sectors considered essential during the pandemic, especially thinking of those who have faced it in the front line.

HERSILL has played an important role in the fight against the virus, supplying in recent months and in record time up to 5,100 ventilators, 51,780 flow meters, 16,540 vacuum regulators, 4,330 resuscitators and 2,720 portable suction units, among other medical equipment so in demand during the health crisis.

The State Tribute, attended by some 500 people, served as a tribute to the almost 30,000 people who died in Spain as a result of the coronavirus and was presided over by the King and Queen of Spain, with political and social authorities as well as relatives of the deceased.

During this civil act the relatives of the victims, the representatives of workers in the sectors and professions considered essential took on a special role. 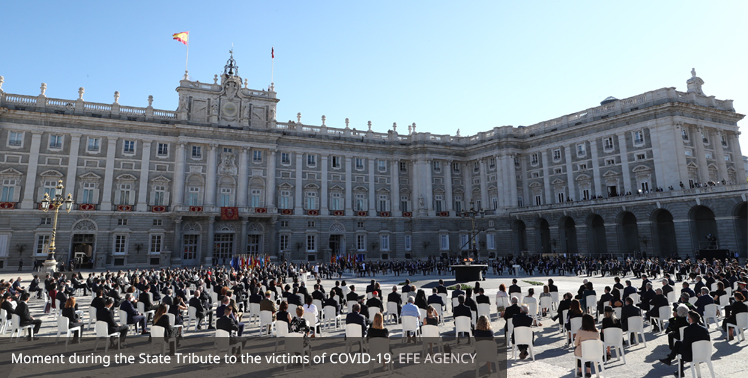 King FELIPE VI was in charge of closing the event, which ended with a minute’s silence, with only two other interventions by a relative of a person who died as a result of COVID-19, who acted as a representative of the victims, and a nurse who came on behalf of the essential groups in the face of the pandemic. 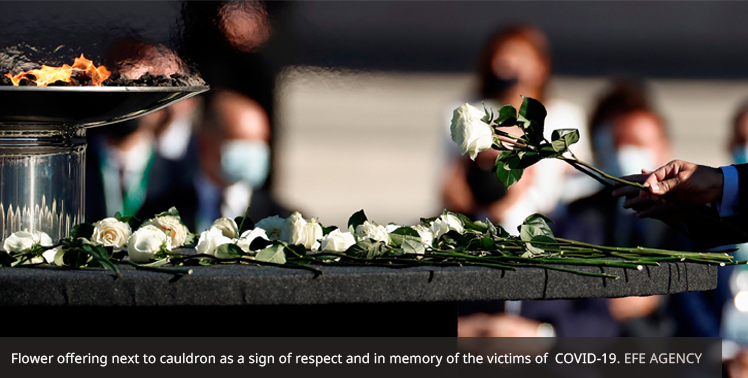 A cauldron with a flame was placed in the centre in memory of the deceased and around it, sitting in concentric circles, the authorities and guests were placed, maintaining a safe sanitary distance at all times.

During the ceremony, both King Philip VI and the two speakers, members of the Spanish Government and the authorities accompanied by a representative of civil society, made a floral offering next to the same as a sign of respect for those most affected during these last months of the fight against COVID-19.

Here we leave you a brief VIDEO made by the MOSTOLES TOWN HALL in memory of all those who died by the COVID-19 and as a sign of support to all their families and friends to whom we hope it will bring some peace in their hearts.

“For all those who have left with the emptiness of a broken embrace and the beat of their heart silenced by the COVID-19 ruling, leaving behind a sea of tears full of unanswered questions, of hugs and caresses frustrated by the forced distance. They will always be in our memory. May the land be light to you D. E. P. #Móstoles“- Móstoles Town Hall

We use proprietary and third-party cookies to improve our services and to show you advertising related to your preferences by analyzing your browsing habits. If you continue to browse, we consider that you accept its use. You can change settings or get more information here
Accept
Política de Cookies
Necessary Always Enabled