HERSILL in tribute to the heroes of COVID-19 on May 2nd in Mostoles, Madrid 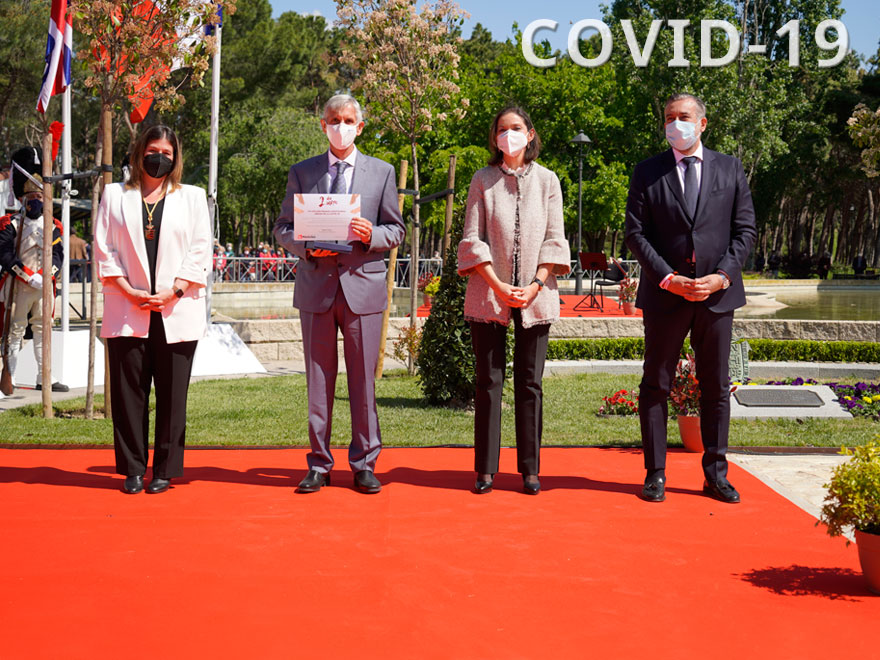 This year, marked by the restrictions imposed to contain the expansion of COVID-19, the celebrations in recognition of the heroes of May 2, 1808 have also paid tribute to entities and citizens who have stood out for their solidarity and support in the fight against the virus during the harshest moments of the pandemic.

For his dedication, for his compromise, for his outstretched hand to help the people of Mostoles, for being there in an altruistic and disinterested way during the most difficult moments of the pandemic, Mostoles (Madrid, Spain) wanted to pay tribute today not only to the heroes of May 2, 1808, but also to all the essential workers who were and continue to be at the forefront. line in the fight against COVID-19.

The Mayor, Noelia Posse, and the Councillor for Presidency and Urban Development, Marisa Ruiz, began the day by depositing three laurel wreaths at the Monument to Simon Hernandez, at the House of Andres Torrejon and at the monument erected in his honor in the Plaza del Pradillo.

Subsequently, they have moved to Finca Liana, where the institutional event of the May 2nd Festival took place, declared of National Tourist Interest in 2019.  A meaningful and solemn act that was presided over by the Mayor, Noelia Posse, accompanied by the Minister of Industry, Trade and Tourism, Reyes Maroto, the Home of Office, Justice and Victims of Terrorism of the Community of Madrid, Enrique Lopez, and the Councillor for Presidency and Urban Development, Marisa Ruiz.

In an event marked by the restrictions imposed by the health authorities to contain the expansion of COVID-19, the First Edil stressed that this atypical May 2 will be remembered “with the hope and conviction that Móstoles, our country and the whole world will already see the light at the end of this dark tunnel, an exit motivated by vaccination and economic recovery.”  He also wanted to thank all the winners for their work.  “Thank you for the tireless and untiring effort that all the essential workers in this pandemic have made”, said Posse. “My sincere appreciation and that of all our neighbors to all the people who have been on the front line of the battle showing courage and professionalism.  Without you, it would not have been possible.”

The Minister of Industry, Trade and Tourism also wanted to thank the awarded on behalf of the Government of Spain for having placed themselves “at the forefront of dealing with a pandemic that every day we are closer to defeating.  thanks to the efforts of all Spanish society and thanks to the arrival of vaccines”, he said.  She also highlighted the work done by the local government, the area of festivities, and by all the neighbors to make the May Day Festival of National Tourist Interest, a title that has been awarded under her management as Minister.

At the express wish of the Mayor, they have also received institutional recognition for their fight against the pandemic and their collaboration with the City of Mostoles during the hardest moments of this health crisis: the ventilators company Hersill, Correos, Repsol Technology Lab, Chistian Galvez, Daniel Miguelañez, the Peñas Federation, the Mostoles Merchants Federation. Synergies, BUHO, Top Global, EDDM, Martin Rea, URBASER, Mercedes Benz, Toyota, Europcar and Workshops Mostoles.

Following the presentation of awards and recognitions, the Mayor, Noelia Posse, and the Minister, Reyes Maroto, have deposited a final laurel wreath on the plaque in honour of the victims of the coronavirus as a tribute to all the heroes of 1808 and of the COVID-19. 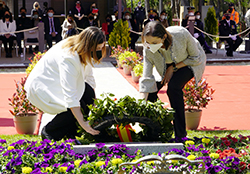 A gunfight and the Spanish anthem broke the minute of silence for all those who died during the pandemic that ended the event in which students from the Rodolfo Halffter Conservatory also collaborated.